Tramping Around in Heidelberg

Recently, a blogging acquaintance of mine living in Frankfurt suggested that we expat bloggers living in the region should meet up. We chose Heidelberg as our location and tweeted our plans in the hopes that others might join up as well.  And I was looking forward to getting back to the city from which one of my favorite writers, Mark Twain, had found so much inspiration.

Last Saturday blessed us with sun and good conversation. Beyond the fun of getting to know each other face to face, we also shared tips on a variety of things. From travel and music apps for our phones, to our favorite spots in Germany to visit, the six of us chatted away the day.

Our first stop was the castle. We climbed the narrow cobbled street to the lower balcony that faces out over the river. One of the bloggers was a Masters student at the University. I took this rest stop as a chance to grill her with questions about life as a student at one of the oldest universities in Europe. 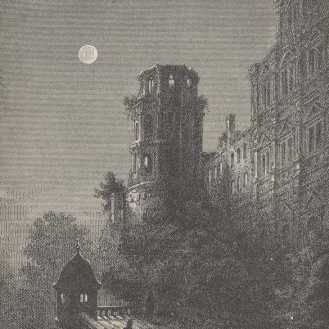 The balcony of Heidelberg’s castle as pictured in A Tramp Abroad by Mark Twain found at Project Gutenberg. 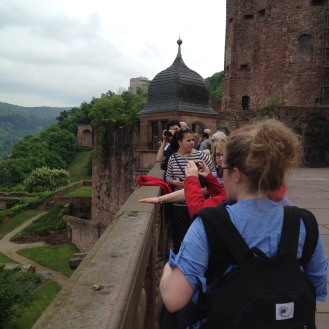 The gang on the balcony overlooking the city at Heidelberg’s castle.

I wanted to know if all those things Mark Twain had written about Heidelberg in the late 1800’s was still true today. Did the students still have sword fights in the fraternities? Her response was, “Yes, but the fighting is much more tame now.” 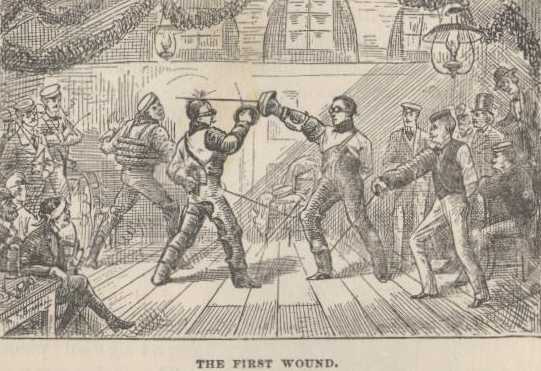 “They were students panoplied for the duel. They were bareheaded; their eyes were protected by iron goggles which projected an inch or more, the leather straps of which bound their ears flat against their heads were wound around and around with thick wrappings which a sword could not cut through; from chin to ankle they were padded thoroughly against injury; their arms were bandaged and rebandaged, layer upon layer, until they looked like solid black logs. These weird apparitions had been handsome youths, clad in fashionable attire, fifteen minutes before, but now they did not resemble any beings one ever sees unless in nightmares.” From A Tramp Abroad published by Project Gutenberg.

Now it has been years since I had read Twain’s A Tramp Abroad, but the whole day I couldn’t get it out of my mind.   The vision of a crowded room with two twenty-somethings faced off, wrapped in puffy bandages to protect themselves from their opponent’s oncoming blows, played on a loop in my brain.

When we entered the student prison I wondered, had Twain been here too?

Most people probably only think of Twain as the famous writer of Huckleberry Finn or Tom Sawyer. But he also wrote about his travels hither and thither around the globe.

He wrote two books on his travels to Europe, one of which also included a side trip to the Holy Lands, in The Innocents Abroad (1869) and A Tramp Abroad (1880). He penned a book about his travels as a young man through the Wild West in Roughing It (1872).  He also described a round the world adventure that included such places as India, Mauritius, Hawaii, and South Africa, in Following the Equator (1897).

The more I thought about it, the more I realized Twain was a lot like us bloggers. He wrote about his travels, whom he met, what he ate, and the strange cultural phenomenon that confronted him. Along the way he would submit drawings and articles to his newspaper back home to be published. It was a “snail” travel blog, so to speak. A few years later he might rework his collection of articles into books.

When I got home I was anxious to re-read what Twain had said about the Student prison.

At the end of A Tramp Abroad you will find the appendix. Here Twain goes into further detail on some of the sights he saw, or various ramblings which did not fit within his larger narrative. In Appendix C: The Student Prison, Twain starts by giving a general description of how students were usually sentenced for their crimes without being present at court. They then received a personal invitation to lock themselves up in jail.

“If you please, I am here to conduct you to prison.”
“Ah,” says the student, “I was not expecting it. What have I been doing?”
“Two weeks ago the public peace had the honor to be disturbed by you.”
“It is true; I had forgotten it. Very well: I have been complained of, tried, and found guilty—is that it?”
“Exactly. You are sentenced to two days’ solitary confinement in the College prison, and I am sent to fetch you.”
STUDENT. “O, I can’t go today.”
OFFICER. “If you please—why?”
STUDENT. “Because I’ve got an engagement.”
OFFICER. “Tomorrow, then, perhaps?”
STUDENT. “No, I am going to the opera, tomorrow.”
OFFICER. “Could you come Friday?”
STUDENT. (Reflectively.) “Let me see—Friday—Friday. I don’t seem to have anything on hand Friday.”
OFFICER. “Then, if you please, I will expect you on Friday.”
STUDENT. “All right, I’ll come around Friday.”
OFFICER. “Thank you. Good day, sir.”
STUDENT. “Good day.”
So on Friday the student goes to the prison of his own accord, and is admitted.

For me, the prison was a place haunted and alive with the past. The profiles of the incarcerated were hand painted onto the walls by the young inmates. Their photographs were sometimes implanted into the doorways. Their graffiti carved into the desks left their marks of boredom. There was laughter there in their caricatures. The ceiling’s smoke signatures expressed the angst of their youth. And the walls cried out with a self-righteous belief that they were all innocent.

Twain was also struck by the graffiti in the prison.

The ceiling was completely covered with names, dates, and monograms, done with candle-smoke. The walls were thickly covered with pictures and portraits (in profile), some done with ink, some with soot, some with a pencil, and some with red, blue, and green chalks; and whenever an inch or two of space had remained between the pictures, the captives had written plaintive verses, or names and dates. I do not think I was ever in a more elaborately frescoed apartment. 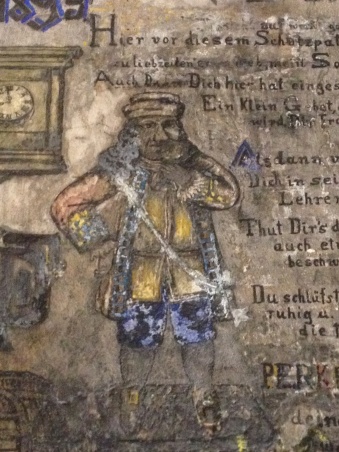 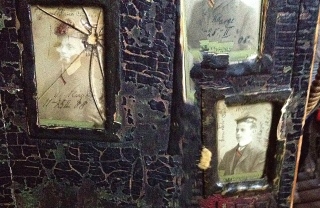 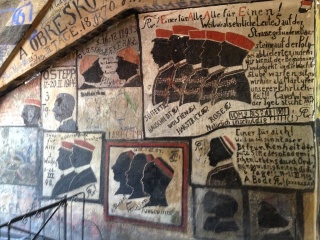 These boys swear they are innocent. 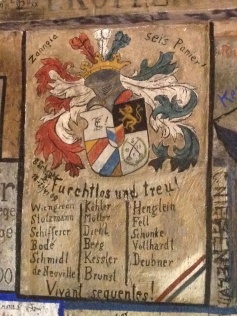 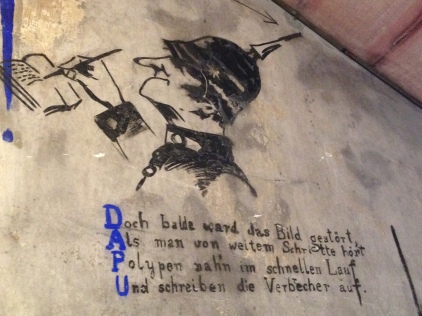 A poem against the powers that be.

He then relays to the reader a few of the inscriptions from the walls. If I had read this before my trip, I would have sought to capture a few of these in photographs.

“In my tenth semester (my best one), I am cast here through the complaints of others. Let those who follow me take warning.”
“Ill Tage Ohne Grund Angeblich Aus Neugierde.” Which is to say, he had a curiosity to know what prison life was like; so he made a breach in some law and got three days for it. It is more than likely that he never had the same curiosity again.
(Translation.) “E. Glinicke, four days for being too eager a spectator of a row.”
This one is terse. I translate:
“Four weeks for misinterpreted gallantry.” I wish the sufferer had explained a little more fully. A four-week term is a rather serious matter.

He, like myself, was strangely drawn to the desk in a cell, all potted with the inscriptions of previous student lawbreakers.

I very much wanted one of the sorry old tables which the prisoners had spent so many years in ornamenting with their pocket-knives, but red tape was in the way. The custodian could not sell one without an order from a superior; and that superior would have to get it from his superior; and this one would have to get it from a higher one—and so on up and up until the faculty should sit on the matter and deliver final judgment…for one of those prison tables, which was at the time in a private museum in Heidelberg, was afterward sold at auction for two hundred and fifty dollars. It was not worth more than a dollar, or possibly a dollar and half, before the captive students began their work on it. Persons who saw it at the auction said it was so curiously and wonderfully carved that it was worth the money that was paid for it.

He ends his account with a funny story of an American student who wound up in the prison on his arrival to Heidelberg.

The day he arrived in Heidelberg he enrolled his name on the college books, and was so elated with the fact that his dearest hope had found fruition and he was actually a student of the old and renowned university, that he set to work that very night to celebrate the event by a grand lark in company with some other students. In the course of his lark he managed to make a wide breach in one of the university’s most stringent laws. Sequel: before noon, next day, he was in the college prison—booked for three months. The twelve long weeks dragged slowly by, and the day of deliverance came at last. A great crowd of sympathizing fellow-students received him with a rousing demonstration as he came forth, and of course there was another grand lark—in the course of which he managed to make a wide breach of the city’s most stringent laws. Sequel: before noon, next day, he was safe in the city lockup—booked for three months. This second tedious captivity drew to an end in the course of time, and again a great crowd of sympathizing fellow students gave him a rousing reception as he came forth; but his delight in his freedom was so boundless that he could not proceed soberly and calmly, but must go hopping and skipping and jumping down the sleety street from sheer excess of joy. Sequel: he slipped and broke his leg, and actually lay in the hospital during the next three months!

Twain’s audience had to wait until he appeared in newspapers or books. Our readers get email notifications, Facebook status updates, or Tweets, to let them know we have a new tale to tell. Twain never received any awards for his writings yet we, simple bloggers, pray for the day that we might be honored with being Freshly Pressed. And we continue to work towards writing that perfect piece, that one post, that might go viral on blogosphere.

But really, our goal is not to receive any honors. The travel, the insights of living in a culture that is not our own, the vibrant multicultural lives that we lead, is the root of what pushes us write. We just want to put down, in the written word, what makes us feel alive.

Have you ever read Mark Twain’s travel writings? Have you had the opportunity to meet up with other bloggers like yourself?

Want to meet my blogging compatriots?

Doin’ Time on the Donau

All quoted portions of text and etchings come from A Tramp Abroad by Mark Twain housed on Project Gutenberg.  Books curated there are available to read as HTML or can be downloaded onto devices for easier reading.