Finding History-Bullets on the Beach

It seems like we are often confronted with our history here in Europe. Whether it is a walk along the Limes in the hills near our house, or whether we are strolling around town and glimpse the sheen of a Stolperstein, history is here.

When we study large units of history with our students we rarely get them to grasp the personal. Who was the guy that sat there in the Roman tower near your house?   How far from home was he? Was he warm and well fed? Or was being stationed in the Taunus a misery?

And when we study World War II, too often we discuss only the monstrous battles, the heroes, and the big bad villains.   Once in a while I get a student who can share a story of a relative, but rarely can they grasp on to the idea that the thousands of soldiers lost were everyday people. Rarely do they sit back in horror and mourn for the men who fell on both sides of the battle. 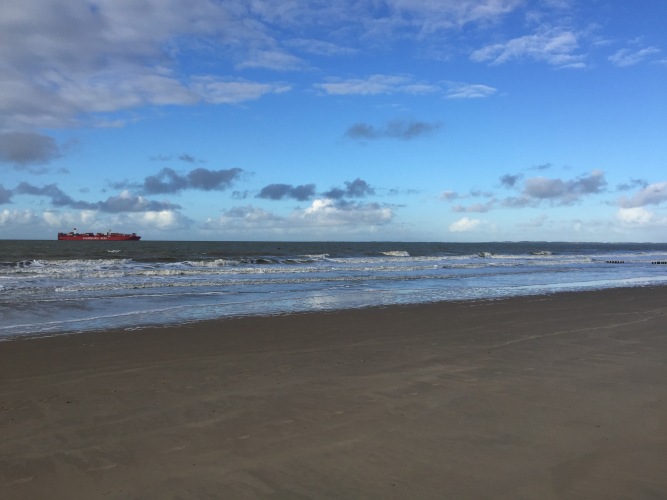 This past week we vacationed on the coastline of Belgium and the Netherlands near the estuary of the Scheldt. The beaches of Zeeland are well maintained. You can walk for hours without limits.   And when you need to stop for a rest and a snack, a strandpaviljoen is strategically placed every kilometer or two.

We went to this region in search of long beach walks and delicious pomme frites.  Instead we found both the heroic and tragic history of a forgotten battle in World War II, The Battle of the Scheldt.

We had done some reading on the area before we left and were excited by the prospect of finding prehistoric shark teeth. During the great flood of 1953, the coastline was greatly disturbed. This storm exposed seabed in such a way that now the natural erosion process brings prehistoric fossils up onto the beach in Cadzand. We packed our buckets and spades and were going to come back with shark tooth booty!

Over the dike at Verdronken Zwarte Polder, near the radar tower, was said to be easy pickins for shark teeth. What we found though was something altogether different.

As we walked onto the sand we noticed a large clay deposit exposed in the beach. All kinds of shells, remnants of sea life, rocks, and what not, are stuck in the bands grey muck.

For some reason I was drawn to something unorganic sticking out of an exposed ridge. I released what looked to be a brass shell casing from its resting place. Who knows how long it had been there.  Then it hit me, this had been stuck here since World War II. 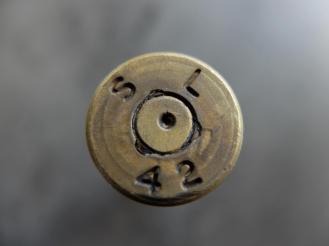 It didn’t take my husband long to locate information on what kind of shell it was. From the markings on the butt, we traced the year and location of its production. This shell was born in 1942 in St. Louis. It came from a Browning M2 machine gun. These guns were on airplanes, tanks, and sometimes strapped onto vehicles.

I then did a bit of research on the possible war history of the area. In October of 1944, this area had seen a lot of action.

From the Official History of the Canadian Army-Department of Defence

The Battle of the Scheldt was fought between the 3rd Canadian Infantry Division and the German 64th Infantry Division from September to November 1944. Although the Allies had taken Antwerp in the hopes of securing a supply port for their troops, the opening of the river Scheldt, that feeds the port, was occupied by the Germans. In order to supply the Allied troops as they moved further east, a more inland port was needed. The Canadians were sent Northeast to secure the opening of the Scheldt estuary to liberate the shipping lane.

The Germans were dug in and were told to fight to the death, if need be. The area was easily defended. And when the Canadians began their assault, there were many losses. One regiment was almost completely wiped out. At moments, they almost turned back.

The Canadian strategy was to take the dikes one by one.  They lobbed hand grenades, threw fiery bursts with flame throwers, and used their heavy guns. The soldiers were standing in knee-deep mud and somehow kept themselves from drowning in the flooded fields.

By October 21 the siege of Breskens Pocket was over and the Allies focused their efforts on securing the other side of the waterway-Walcheren Island.

In every documentary I watched, little time was spent discussing what happened at Breskens Pocket.  The focus seemed to be more on the defense of Antwerp after it was liberated.   It is only through readings of journals and Canadian Military archives that you get a glimpse of the slow, bloody,  and arduous task of clearing the Pocket.

The battle seems irrelevant to the media, but not to the school children of Retranchment. They are the ones in charge of the upkeep of one of the few memorials in the area celebrating their Canadian Liberators. 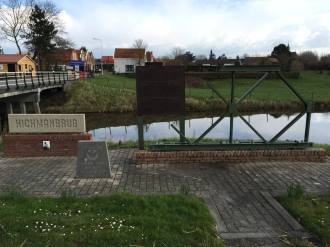 Holding the shell in my hand, I wonder.  Did this bullet hit its mark?  Or did it barely miss him?  Did the soldiers entrenched near this beach get captured?  Or did they die fighting to keep their position?  They had mothers, brothers, wives, and families too.  And every time a young mother walked through the village, pushing her pram,  their hearts probably ached for what they had left behind in Germany.

I stood there on the windy beach holding the man-made shell, straddling not just history but the battle lines:  my father-in-law on one side  and my cousins on the other.  Heroes were made here and heroes fell here.  Today I will mourn the losses of the men on both sides of the dikes.