For years I have been dreaming of a trip to Cinque Terre. Every time we think about where we want to go over the school holidays, the 5 T’s always tops the list. I have read and re-read Rick’s descriptions of where to go, what to see, and what to eat in the Cinque Terre. I have looked at maps of hiking trails. I have searched the web for great places to stay. So many times we have planned on going, and then at the last-minute we change our minds.

When I read through Rick’s details of towns, I only comprehended that they were quiet and quaint. And of all the towns, he showers the most praise on Vernazza. He describes this tiny town as “..the jewel of the Cinque Terre.” He eloquently narrates that the locals fish off the promontory at night with bobbles that glow in the waves. He encourages the visitor to “sit on a bench and study the passersby doing their vashe (laps). Explore the characteristic alleys, called carugi. Learn—and live—the phrase ‘vita pigra di Vernazza’ (the lazy life of Vernazza).”

So this Easter break, I was going to the Cinque Terre. Even though it would just be for the day, I would finally get to see it for myself. I figured it would be more of a reconnaissance trip for where I would want to spend my time on a future vacation. The beauty of teaching at a school in Germany is that I get vacations about every 6-8 weeks. This allows for travels in Europe at off-peak times.

Our view at Portovenere

On the day after Easter, we decided to cruise around the bend from our home base in Portovenere to the Cinque Terre. Our plan was to go to Vernazza first and then work our way back through the other villages.

We were 30 minutes early for the boat. We waited with a small group.  As the boat arrived at the dock, so did hundreds of other people. It went from a being a congenial small clump of sightseers, to a large mass of pushing and shoving grumpy Italians.

When the boat began to load, it was like being pushed into a slow sucking sieve.  As much as you wanted to go with the flow, there was this worry that we wouldn’t make it on the boat.  We were first in line, but somehow hundreds of people had pushed their way in front of us.  I kept screaming at my child “Don’t let go of Mama’s hand!” The adults around her were literally body slamming her to get around her.

Once on the boat I breathed a sigh of relief.  That would surely be the worst of this excursion to paradise. 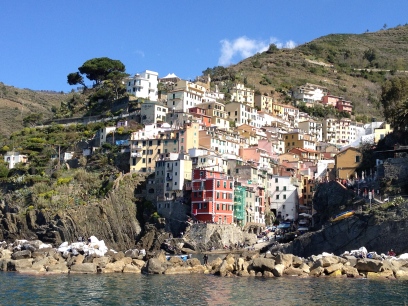 The cruise took about an hour.  We stopped at Riomaggiore first. Gorgeous! Breathtaking!  The colors, the cliffs, the blooming succulents and cacti streamed down the dark rock walls like waterfalls.  Then we stopped at Manarola.  More brightly colored houses were gripping the rocks in an effort not to fall into the sea.   Our captain pointed out Corniglia high up on a mountain peak, as it has no harbor.  Then finally we reached our destination–Vernazza.

Again there was the mad crush to get off the boat.  Once sucked out onto the shores of Vernazza we decided to find a place to eat.  Unfortunately, everyone else on the boat seemed to have the same idea.  This felt a bit like a super competitive game of musical chairs.  Find a place to sit before the music stops or you will be out.  Every outside table seemed to be reserved. We walked back across the piazza, into a cavernous restaurant, and hoped for the best. 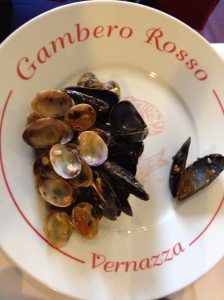 The carnage from my spaghetti with clams and mussels.

Gambero Rosso, according to Rick is “Vernazza’s most venerable restaurant.”  The food did not disappoint, it just took forever to get to us. We arrived to a basically empty restaurant.  A few tables had people, a few were reserved, but the waiter graciously offered a table to us and promised to be right back to take our order.  There was much running back and forth between other customers.  He seated more people. Some he took orders from and brought out bread and wine.  But we still sat there patiently wondering when the two minutes he kept promising us would be over.

Once we ordered, the food came out promptly.  It was probably the best food I had on the entire trip. But I couldn’t get over the feeling that we were being ignored.  The Italians were being given good service, we were told “just two minutes senora.”  Then again, maybe the Italians were demanding the service.  At some point, we decided to just get up to leave, as the waiter didn’t seem to want to take the time out to let us pay.  I waited another 10 minutes in a now packed lobby to hand over my credit card.

With a full stomach, and feeling a bit more courageous, we wanted to venture out and discover why Rick had called this place “the jewel”.  As we climbed our way up through town a train drained itself on top of us, and up from the harbor came another hoard of tourists who had recently disembarked.  We were sandwiched in a squeeze play. There was nowhere to go.

This was not the dreamy moment I had expected. I just needed to find a quiet spot to take it all in or possibly cry. “Let’s get a gelato and go to the beach!”

We made a surprisingly quick stop at Gelato Stalin and then we went to find a rock to sun ourselves on.  Too late.  There were at least 200 people already doing that on the tiny stretch of the boulder strewn beach.  Some had left behind their lunch wrappings.  Some screamed at passersby for they thought they were about to get stepped on. 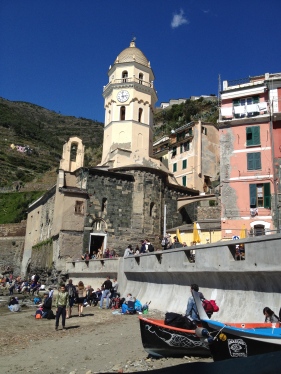 My best try at shooting Vernazza to get the least amount of people in the photo.

We could take the mobs no longer and just decided to leave. But wait, that means squeezing through the masses and waiting for a boat in a crowd of angry impatient tourists.  I didn’t care.  Just get me on a boat, any boat, off this crazy rock!

We took the wrong boat.  It went to Monterrosa.  Monterrosa, the place which is the most resort like, actually felt much more calm and welcoming.  It didn’t matter though, we were getting out of this place as fast as possible.

On the boat ride back I tried to decompress.  Deep breathing and the anticipation of tall glass of red wine back at the apartment kept me from losing it.

I cursed my friends for their idyllic descriptions of this place. I cursed Rick Steves for leading me to believe this was the top spot to go for those who love “off the beaten path.”

Once home, back in Germany, I grabbed up my Rick Steves’ Italy so I could look for the damning evidence that Rick had led me astray.

Then there it was. It was like in those movies when someone is reading something and this special halo of light appears around a phrase.

“The long Easter weekend and August are peak of peak.”

“I see the tour boats as a syringe, injecting each town with a boost of euros. The towns are addicted, and they shoot up hourly through the summer…masses of gawkers unload from boats, tour buses, and cruise ships, inundating the villages and changing the tenor of the region.”

So I guess I can’t blame Rick Steves for the crowds. He warned me that Easter weekend was peak of peak. And I can’t blame him for the “changing tenor of the region.”  He hadn’t steered me wrong before.  It was all just so maddening, this loss of a dream, this loss of my perfect Italian destination.

A panoramic view of Vernazza before the hoards of people rushed the boat dock.

Do I try again?  Do I go in November to hike the villages?  I don’t think I could bear it if I arrived in November to the same amount of screaming hoards.  My advice, and I know I’m no Rick Steves, is stay in Portovenere. Take a cruise to see the Cinque Terre from the water.  Don’t listen to the siren’s song that begs you to go in and explore the villages. Don’t get off the boat!

Have you been to Cinque Terre?  Did you experience the “lazy life” or the mad crush of people?