“Mrs. Ralf, I found you on Twitter this weekend and noticed you posted during school hours last week.”

Hmm. How should I respond to this?  At first, I felt a bit guilty.  Yes, I did tweet during school hours last week.

“So….What did I Tweet about?  Was it some sort of teacher type stuff?”

He/she didn’t respond at first.  I continued to question him/her since he/she obviously had been trolling me.

“Did you find my blog?  Did you find the other publications that have published my writing?”

At this point the poor child looked like he/she was sorry that he/she ever brought it up.  But since he/she brought it up in front of the whole class I decided to use it as a teachable moment.  Be sure to keep your cyber self clean just in case someone decides to troll you.

For some professions, the use of social media is imperative.  An acquaintance of mine who is a reporter for a well-known international news agency said that he uses social media to promote his own stories, keep in contact with other colleagues, and chase down developing stories. Reporters at his paper are also trained to write headlines that will more easily appear higher on the  Google News page or have a higher chance of being re-tweeted.  His paper also has a Social Media Editor who is in charge of tracking the reach of their articles on social media.

Another acquaintance of mine who works for a well-known NGO said he is also noticing the growing use of Twitter at work related conferences.  At a recent gathering in Geneva, he looked around the room and saw many audience members staring at their phones.  During a dull moment he decided to scroll through his Twitter feed.  He realized that audience members weren’t messing around on their phones.  The audience looked passive, but in actuality they were quite engaged in the presentation by participating in the discussion on Twitter.

Not surprisingly, some of the friends that I polled stated that they are not allowed to use social media on the job. Those working in hospitals or government jobs, even those who are in charge of IT Networks, said that Twitter, Facebook, and the Google+ are blocked at their work place.  One friend mentioned that this did not stop the use of social media in his workplace.   The employees just use their smart phones instead of their computers to connect.

I find that more and more teachers are giving up their accrued email lists and moving towards Twitter, Google+, LinkedIn, and Facebook to keep connected. 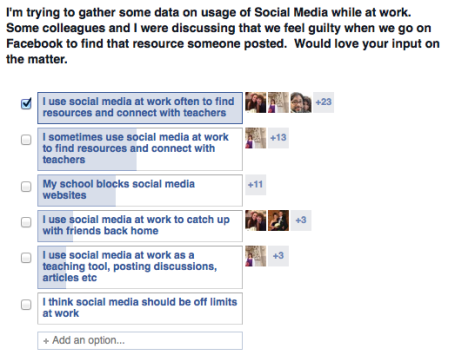 I ran a small poll on an International School teachers group on Facebook.  Out of a group of over 7000 members, only 60 responded. One could say that the results of my poll are a bit tainted since I used social media to poll teachers. Only teachers who are currently using social media would be able respond.

Many of us connected teachers are now, with the help of social media, creating Personal Learning Networks (PLN) where we find and pass along resources for our curriculum, share tips on unit plans, or get needed advice when faced with unique classroom challenges.

My PLN has provided me with some of the best professional development I get during the school year.  Numerous articles to beef up my knowledge on a wide range of subjects come my way daily through Twitter and Facebook.

The discovery of Erin Meyer and her Culture Mapping has really helped me re-think how I deal with parents and students who come from a different culture than my own.  A tweet leading me to National Geographic’s coverage of the The White War has expanded my knowledge of Austria and Italy’s involvement in World War I.  When needing support on Blended Learning, I have a huge range of teacher friends all over the globe who I can call upon to help me brainstorm ideas for change.  And just today from @Raconteur, I rediscovered an excellent discussion tool, the 6 Hats, to create dynamic and interactive problem solving discussions in my classroom.

I guess really this isn’t a new dilemma. When we have free moments at work, how do we use those moments constructively?  Do we use those 30 minutes to shop online or do we use it to mark papers?  Do I go to the library to look up that voter statistic from 1932 or do I just go to twitter where I know @activehistory just posted it?  If I use my time legitimately to work, then what is the problem?

Maybe I need to model this kind of work with social media for my own students.  Once in a while I might need to take them on a trip to Twitter-land to help them discover the marvelous resources available to them.  And maybe if I give them the opportunities to be distracted by social media in the classroom, they will actually learn how to use social media as a tool rather than a distraction in the future.

What do you think? Is it ok to use Social Networks while at work? Or do you think the workplace/classroom should be free of this digital distraction?