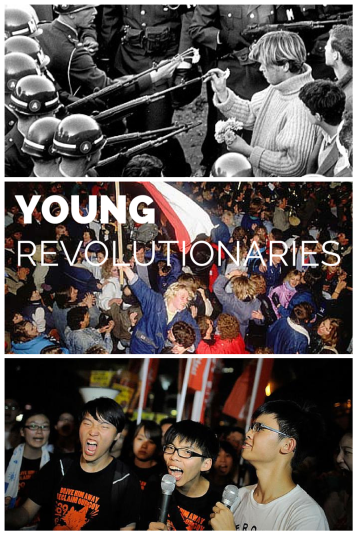 Last week a friend was over to dinner and I inquired about her teenage years in Czechoslovakia.  “So tell us about the Velvet Revolution.”

She peered over the lip of her glass while she sipping her Pilsner and smiled.  She slowly began to recall the day that she and her fellow classmates left high school early to hold their peaceful demonstration.

I called my mum from school to let her know I would be late coming home and not to worry.  Public transportation would probably be shut down due to thousands of people expected at the protest.  It would take me over 3 hours to get home if I had to walk.

I knew my mum was a bit scared, but she supported what we were doing.  She had been there too, back in 1968, putting flowers on the Soviet tanks.  She knew I had to do what I was about to do.

Goosebumps formed on my arms and I had a bit of a shiver.  I tried to act as if the actions being described to me were normal.  A teenager rising up in the face of the communist establishment is normal.  Risking your life at 16 to protest for a free democratic state is normal.  Right?

Then today I watched as reporters interviewed the teenage protestors in Hong Kong.  These young students, members of the Umbrella Revolution, showed the cameras their make shift eye protection and towels they planned to use in the face of tear gas and pepper spray.  They were prepared to face a violent stand-off in order to gain a full democracy.

We should never underestimate the passion of a group of students who are ready to stand up for change.

Have you ever risked your life for change?