Is the Crisis in the Crimea a Warning Sign?

As the crisis started to heat up last weekend in the Crimea, I wondered…would I know when to get out if the political crisis worsened here in Europe?

Whenever I teach or read about the Treaty of Versailles and the Rise of Hitler, I am always struck by the abundance of warning signs and the critical mistakes made by world powers. These warning signs and mistakes are obvious to us in hindsight, but those who lived in those times could not escape the slow brewing storm that would eventually overtake them. 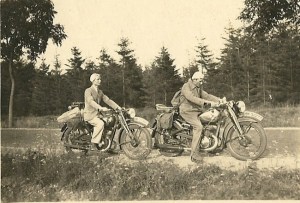 Helmut with friend on a camping trip.

Two of my husband’s uncles left Germany before the war.  They were looking for a better life in a country that seemed to be more economically stable; they landed in the United States.  In 1937, Helmut, my husband’s father,  remained in Hamburg.  He had just finished his apprenticeship and was becoming a master in his trade. Life was good.  He purchased a boat with friends to cruise the Elbe.  He rode around the countryside on his new motorcycle.  The economy seemed to be getting better, so why leave Germany to join his brothers in the States?

A few years later he found himself captured on the Eastern Front and fighting for survival in a Prisoner of War camp in Cherepovets, USSR.  I’m sure he was wishing then that he had left Germany when he had had the chance.  But he didn’t heed the warning signs.

When he returned to Hamburg, although glad to be free, the devastation and near starvation of the people in the city made him feel like he was once again a captive. And as the Soviets were sitting a mere 60 miles away from him, he planned to move to the states.  He wanted to put distance between himself and his captors.

I look at the news footage from the Crimea and wonder…is this a warning sign?

Hitler staged riots in Austria.  He put pressure on Chancellor Schuschnigg, explaining that the only way to thwart the riots was to allow the Anschluss to happen.  Schuschnigg asked for a referendum to see what the Austrians wanted:  unity with Germany or autonomy in their own country of Austria.

Hitler then sent troops into Austria to ensure that a fair vote was taken.  He didn’t want the Austrians to feel pressured by the current Austrian state to make the wrong decision.  99.75% of the people voted to become part of Germany.  With the presence of the Russian military in the Crimea, I wonder what percentage of people will vote yes to unite the Crimean peninsula with the Russian Federation.

And once Putin has secured the Crimea, will he stop?

Per cent of German mother tongue speakers in the Sudetenland region of Czechoslovakia. c/o Wikipedia

As in Austria, Hitler later tried the same tactics in the Sudetenland.  He staged riots and called upon the world community to secure the rights of ethnic Germans living in Czechoslovakia.  Hitler later threatened to invade Czechoslovakia if his demands were not met.   Today, experts cannot agree as to whether Hitler was actually prepared to go to war over the area.  But in 1938, Lord Chamberlain wasn’t prepared to find out.  That September was filled with numerous back and forth negotiations. Finally, it was agreed to give Hitler the Sudetenland rather than risk an armed conflict.

What was Hitler’s reason for taking Austria and the Sudetenland?

The people in these regions were German.  These people had been persecuted and he wanted to alleviate their persecution.  He wanted to free them from their oppressor by reuniting the people with their true culture and country.

The Allies, after World War I had created a Treaty that endeavored to weaken German industry, but they didn’t think about what crisis might be caused by drawing up borderlines that isolated ethnic groups within newly created countries.  The Allies didn’t consider that the Treaty would create a brewing resentment against those that took their land and resources, and that this might lead to another war in the future.

What is Putin’s reasoning for taking the Crimea?

He is reuniting the Russian people who ended up in a new country when new borders were drawn.  Even though Khrushchev gave the Crimea to the Ukraine in 1954, the two countries, USSR and Ukraine, were still very much connected.  Putin feels he is protecting the rights of over one million ethnic Russians who say they have been persecuted by the Ukrainians since 1991.

But where will it stop?  Will Putin look to take over other areas in countries where ethnic Russians might be located?

And what about the population of Tartars and Jews?  They were brutally persecuted by the Russians in the past.  What will happen to them if the Crimea reunites with their old aggressor?

The world watches and waits.  We sit and listen to the news thinking…is this a warning sign?

As my students reenacted the creation of the Treaty of Versailles this week, they were appalled at what happened after World War I.  They couldn’t believe that the world powers had sought to punish Germany to such an extent, rather than address the issues that caused the war in the first place.   They couldn’t believe that although the great powers all had a hand in starting the war, only one country seemed to receive all the blame.

They couldn’t believe that borders were redrawn and that 3.5 million citizens of Germany were separated from their home country just because they lived near industrial resources that were needed to make the new Czechoslovakia economically stable.   They couldn’t believe that innocent people were now living in new countries, having never been given the chance to choose a country for themselves.

Is history repeating itself? I don’t believe Hitler’s actions were just in taking Austria and the Sudetenland, but I do want my students to understand why he felt justified in doing it.  It is difficult to divorce the outcome of Hitler’s regime from his actions in 1938.  But world leaders had no idea, at the time, what he would become, and for that matter, Hitler may not have even known what he would become.  The Final Solution was yet to be created; the horror of the Holocaust was still unimaginable.

We are now faced with events in the Crimea and we have no idea what form the conflict will take.  It may end peacefully or it may be just a step that takes us deeper into a growing crisis.  Crimeans are worried.  Some are boarding trains to flee the area before the referendum takes place.

When I look at what is happening, I wonder if we are traveling down that road again.   Is the Crimean crisis a warning sign?