So, I just ran a Half Marathon. Now what? 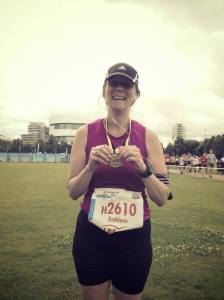 Me with my super cool medal. My daughter thinks I won. Don’t tell her otherwise. (picture care of B. McAvoy)

So I ran the Half Marathon on Sunday.  Yep.  Checked it off my list.  But now what?  I hadn’t even been finished 10 minutes before “the professionals” started telling me that I have a marathon inside me waiting to come out.  I don’t know about that.  As they were saying this I was thinking….”My feet fucking hurt right now after 21K, how would they feel after 42.194988K?”  Yes that last .194988K is important.

I celebrated my achievement with beer, chicken wings, French fries and an ice cream sundae.  I had earned those delicious glasses of German golden elixir.  But my brain kept saying….now what?  “I’m gonna rest, damn it!”  Now what?  “GET BEHIND ME SATAN!”  I hope I didn’t yell that out in public.

As I relaxed that evening on the couch with ice on my feet, I reveled in all the positive props I was getting on Facebook.  Then I searched for it.  I couldn’t stop my hands from typing it: Frankfurt Marathon October 27, 2013.  Hmm.  No time requirement.  There is a start for those who have never run a marathon before.  Maybe….FORGET IT!  How can I possibly train for a marathon and pack my house and start a new job and put my daughter in the first grade and…and…and. 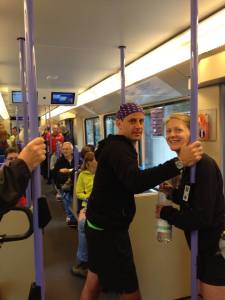 The professionals. Marathon runners. They run 100’s of miles before most people get out bed in the morning.

Then today, one of my colleagues and running mates said…”What do you say…Berlin Marathon 2014?”  She held out her pinky to try to get me to commit.  I felt my right hand raise slightly to meet her’s, then I pulled my hand back quickly.  We both laughed, and to tell you the truth, I think she was a bit relieved.  No pinky pacts….yet.

So to answer the question: Now what?  I don’t know.  I think I would like to increase my speed.  Maybe I could do a few more half marathons.  I’m just not ready to commit the time and miles yet to what it would take to enjoy running a marathon.  The key word there is “enjoy”.  I think everyone does have a marathon in them, but it takes a lot of hard work and preparation to actually enjoy that marathon.

And to Felix Baumgartner and Nick Wallenda, I hope you are able to find something next, something that will calm that voice within you that says “Now what?”